As I predicted another day has arrived. My overnight stop is very close to Esztergom, but I just had to stop at the Old Fisherman's Hotel.
The building is old style with thatched roof, the first floor is taken up by lovely clean rooms, the ground floor is a huge restaurant serving a very good fish soup; people come for miles to enjoy it. If you don't like fish you can choose from a large selection of excellent food at very reasonable prices.

After a good night's sleep and a hardy breakfast I started on a 23 km walk,the first 20 km alongside the Danube, the next 3km inland to Hilltop Borhotel (Wine-hotel) - as the name suggests on top of a hill.  According to the map 350 meters high.  If you consider the ups and downs and the 20 km already walked it felt like Mount Everest.

I was looking forward to a warm bath and a rest but my day was only getting worse.  A tour group took all the rooms in the main building and I was given a room in a building 200 meters down the road, the ground floor was used as a storeroom plus some rented out office space, the first floor had three rooms, they must have been used and cleaned days ego, dried out flowers from the trees outside covered the floor of the bathroom and ants were having a party all over the unit. Unfortunately I had to stay as there was nothing nearby to go to. I have to say the diner and breakfast was good and the view of the vineyards and the countryside spectacular, but I forgot to take a photo.

As the saying goes, what goes up must come down - just as well.  I had an easy day going to Tata, my next stop. The hotel was just like a dream, beautiful clean room with a large patio, in-door swimming pool and a spa. Tata is a lovely small lakeside town with many streams and canals.  It was famed for its 18 flour mills, some as far back as 1587. It is unfortunate they have been allowed to deteriorate.
Most of Tata's attractions are located close to the Old Lake.  Biking, horse-riding, cafe-shops and the moated XIVth century castle (Oregvar) and to the south the Baroque town center rebuilt in the XVIIIth century having been completely destroyed during the Turkish wars. In the morning target Komarom 22 km. No hills!

Posted by Geriatric Backpacker at 00:05 No comments:

Nine days on the road, four different hotels 150 000 steps from 8000 to 28000 a day.  During my travels to Europe to the U.S. and elsewhere I always enjoyed visiting the towns and cities but just passed through the countryside at a 100km an hour even if I saw something of interest, by the time i could safely stop the car we were well past the spot so just kept going. The joy in walking is being able to admire what is around us, flowering bushes and trees, wild piglets playing in the grass, baby ducklings following their mother through land and water or see the river reclaiming the flood plains I could walk over the day before. 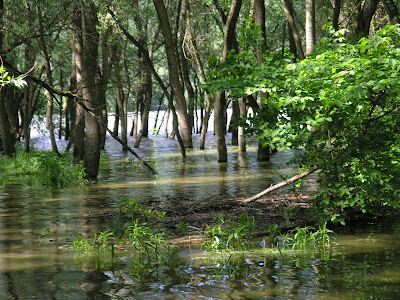 On the debit side my sore and swollen ankle is the easy winner, at first the spas reduced the problem but my 28,000 steps did not help.

Fortunately my G.P. had the foresight to prescribe an anti-inflammatory pill. I am taking tonight for the first time.  The next two days will be easy, the one after will be hard. After just three hours walking on the bike-path alongside the Danube I arrived to Esztergom. It was here Prince Geza brought Hungary into the Roman Catholic Christendom.

Prince Geza's son Stephen was crowned as the first Christian King of Hungary on Christmas Day 1000 A.D. by a papal envoy. With the help of Bishop Gellert, King Stephen began converting his pagan subjects. Various tribal rebellions were crashed and Stephen was canonized in 1038, after his death. Bishop Gellert had a somewhat less successful end, locked in a barrel he was rolled down a Buda hill now bearing his name (Gellert Hill) into the Danube,a statue on the side of the hill commemorates the event.

But back to Esztergom, the currant Basilica the largest in Hungary standing a hundred meters tall was built from 1822 to 1869 on the sight of the First Cathedral where King Stephen was crowned. 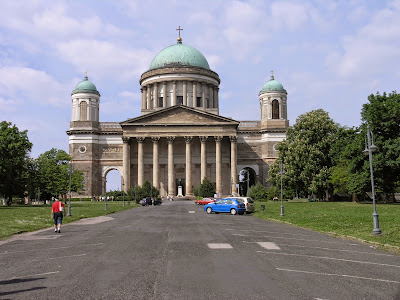 The remains of the Castle are also on the same hill. 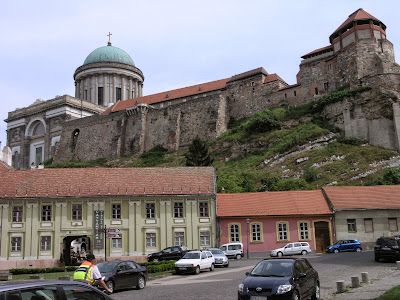 There are numerous museums to visit or just have a nice walk on the tree lined promenade alongside Kis-Duna  with Primas Island just over the bridge. Just outside of town i attended an outdoor Church Service with more faithful in attendance than in any of the churches in town. 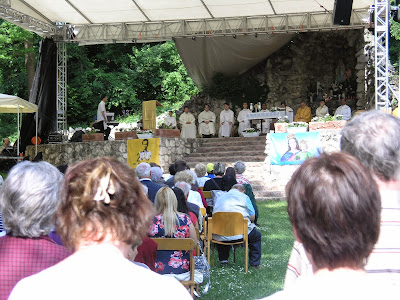 I also met an old friend the Maria-ut (Pilgrim's Road) sign I first noticed in Godollo just outside of Budapest. 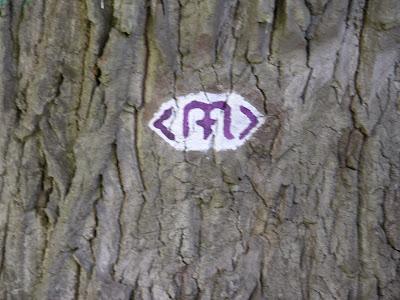 Tomorrow is another day and another experience.
Posted by Geriatric Backpacker at 00:39 No comments:

Yesterday morning I started early (8.30am) Szentendre to Visegrad 23 km. up north. Mostly I have to share the road with on coming cars except for a 4-5 km stretch of bike-walk path. The road is flat and the walk is not too difficult, going through a number of small towns there is no shortage of food or drink or a place to rest, however the backpack is heavy on the shoulders.

I took an extended rest and a long-black at the last ferry terminal to the Szentendre Island just 4 km to Visegrad.


I freshened up for the remainder of the walk but I was really happy to reach the hotel. Room with breakfast, swimming pool, spa and sauna, all for $50 Australian a day. The view from the terrace is spectacular, the green hills, the Citadel on top, built by Bela IV to protect the town against a recurrence of a Mongol invasion.
This is one of the grandest stretches of this great river, as it is finding its' way through the Borzsony and Pilis hills.

After a good breakfast I started out to visit the main historical sights of Visegrad. The "Royal Palace" was built enlarged and used from the 13th to the 16th century.

During the Turkish occupation (150) years, it was neglected and eventually mud washing down from the hill gradually buried the Palace completely, later generations doubted its very existence. During a New Year's Eve party in 1934 the archeologist Janos Schulek was asked to get some more wine from a neighbor, going down to the wine cellar he found clues that convinced him the Palace was there, later unearthing one of the Palace vaults.
Now largely excavated it is being reconstructed. "Solomon's Tower" named after an 11th century Hungarian king, is on the low part of the fortification. Immediately behind the tower is a signposted walk path leading up to the Citadel. The view from the Citadel has to be experienced...
On the way down an alternative path leads right into town and a shade less difficult. An Ice-cream shop awaits the deserving at the bottom of the hill.

Posted by Geriatric Backpacker at 23:12 No comments:

First Day of the Long Trek!

The first day of my trek, starting on the Buda  side of Lanchid (Chain Bridge) at the location of the 0km stone.
As the saying goes "All roads lead to... Budapest?" I pass Aquincum, the old Roman Garrison town,
it eventually becomes the provincial capital of Panonia Inferior, I can see most of it just walking by.

Leaving Budapest I join a walk/bike path running alongside Road 11; easy four hours walk to Szentendre
a "working Artist Colony" since the 1920's. The character of the town was formed by waves of refugees from Serbia after the Serbs defeat by the Turk's at Kosovo in 1389 and a large group of 6000 in 1690.  By the 1890's less than one quarter of the residents were of Serbian origin, today just a few dozen families remain.
The old town is full of restaurants, cake and cafe shops, souvenir shops, shops selling the work of renowned local artistes, historic buildings and churches. Well worth a visit. On the afternoon of my second day in town I crossed the Danube by ferry to the island of Szentendre (hourly service on the half hour).

Ten minutes walk from the terminal is the Rosinante Hotel a country-style inn with rooms,
spa facilities and a restaurant. It was well past lunch so I ordered, duck with strawberry sauce and
(something like small longish doughnuts) it was unusual and very good.  After lunch I continued my walk to Szigetmonostor a small town 2 km. north. A few hundred meters on, I noticed a family of wild piglets
playing in the grass just a few steps in from the road.  The island has excellent terrain for horse riding and some good riding schools. On my way back I looked out for the piglets with no luck.
On my third day I had an early start to visit the Hungarian Open-Air Museum Skanzen, of eighteenth and nineteenth century rural architecture. Actual homesteads transported and rebuilt on site. Very interesting but I much prefer to live today. An eight-nine km round trip, good warm up for tomorrow's trek.

Posted by Geriatric Backpacker at 22:34 No comments: